August saw a small 3-car group of Absaroka members head off to Virginia City, Montana to take in the legendary Brewery Follies at the H.S. Gilbert Brewery. Unfortunately the trip had some unfortunate setbacks as several who planned to go had unexpected changes to their plans. Most notably, Absaroka President Stephanie Haider and her husband Daryl couldn’t make it due to the loss of Daryl’s mother on Friday morning. Our thoughts and prayers go out to them and their family.

Absaroka members Neil and Kathy Hansen from Powell were able to join Dan Cole and Jo Pintz-Cole for the drive to Virginia City. It had been several years since we had seen them and was great to have them along for the journey and get to know them both better.

From Billings a caravan of two blue 2001 Boxster Ss looked great travelling the highway together and really showed the color difference between Lapis Blue and Midnight Blue. Lapis Blue is definitely blue, whereas Midnight Blue is dark and can look purple depending upon the light. In Bozeman we connected with Steve Homec in his silver Carrera. Unfortunately, Susan couldn’t make it because of a work commitment. 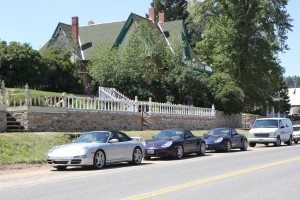 Steve led the way as we rolled over the grain-covered hills towards the Madison River. There we followed the Madison, which was full of rafters and tubers, on a fun twisty road as we headed towards Ennis.
In Ennis you turn right and leave the flat open spaces and head over the mountains to Virginia City. Virginia City is a “ghost town” and a nice example of the life in early Montana. It is still the county seat of Madison County and the original court house is still the seat of county business.

The first order of business was to grab some lunch at the Outlaw Café. Afterwards, Steve suggested we take the tour on the old fire engine to learn about the city and see the sights. It was a good call. The driver and tour guide sounded like Slim Pickens and gave us all a nice history lesson. While we waited for the tour to begin we noticed two other Porsches in town; a new silver Carrera Cabriolet and a silver Cayman. Unfortunately, we were never able to meet up with them and find out where they were from. They certainly couldn’t have missed us as we were parked along Wallace Street in front of the former Territorial Governor’s Mansion from 1864.

Have you ever seen the number sequence 3-7-77 anywhere? At the Boot Hill cemetery our tour guide revealed 3-7-77 as the motto of the Montana Vigilantes. The infamous Montana Vigilantes were the law of the land in 1860’s Montana Territory. If you awoke to find 3-7-77 written on your tent, cabin, etc. it meant get out of the territory, or you would be hanged in short order. Justice was swift in Virginia City. The graves of the 5 “road agents” that were all hanged in the Hangman’s Building on January 14, 1864, are proof of their efficiency. Where does one currently see 3-7-77 in Montana? It’s proudly displayed on the side of the cars of the Montana Highway patrol! Lucky, none of us got to learn that bit of trivia on the side of the road.

We then learned about Jack and Virginia Slade. Slade was a local operator of the toll road who decided to get drunk and go on a rampage in downtown by shooting up stuff and breaking windows. He was hanged by the vigilantes for this egregious misdemeanor. Mrs. Slade, feared by the locals more than her husband was, didn’t want her husband buried next to the road agents in Boot Hill so she took him home and pickled him for the winter in her bath tub. The next spring she shipped him to Salt Lake City for burial. Only in Montana! 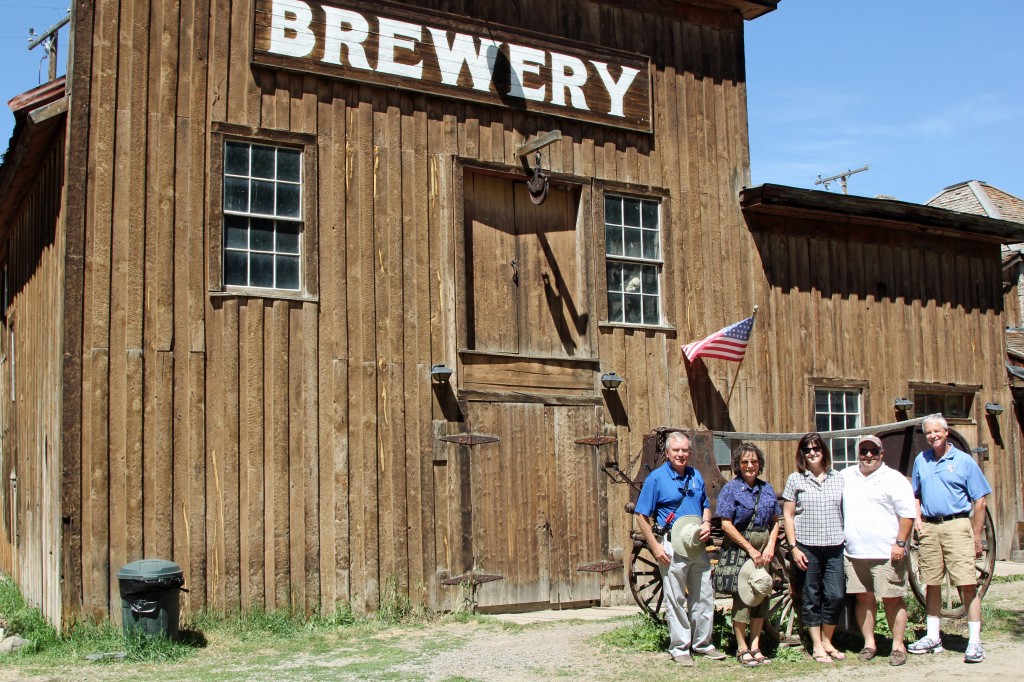 Next stop was the H.S. Gilbert Brewery and home to The Follies. The brewery brewed beer in Virginia City from the 1860s until prohibition shut it down in 1919. Now the Brewery is home to the Brewery Follies, a raunchy, funny vaudeville type show that is not for the timid. We were warned more than once before the show began offering plenty of time to rethink the situation. Steve, a veteran of the Follies advised us all not to sit in the front row which was advice that we all heeded. Sitting in front would surely have opened up one of us to being a “volunteer” prop for their antics. Four talented actors/musicians put on a two hour show that at times had us all in stitches. The skit of Johnny Cason’s “Carnac the Magnificent” was spot-on for all those that remembers seeing Johnny on TV. During the intermission we enjoyed the new H.S. Gilbert Beer resurrected and brewed in Helena exclusively for the Brewery and one other bar in Virginia City. It was good beer and we’re glad we took in the Follies as we all had a blast!
After the show we headed back over the hill to Ennis. During the Follies a joke was made about heading over the Ennis hill and having to swerve into oncoming traffic to miss a bicyclist. The joke was spot-on. There were numerous cyclists (aka Moving Chicanes) tackling the steep grade, but we all made it through at a fun clip and without incident.

The Sportsman Lodge was our overnight location in Ennis. From the website it appeared to be a nice place. Long story short, it was a roof over our heads, but a bit too rustic for some. The tour planner’s research was a bit off and his scores on TripAdviser Tour Planner have been duly marked! The bright side was the Coldsmoke Scottish Ale one of Montana’s most popular beers from Missoula was cold and plentiful and the conversation was good.

It was another fun trip in the Absaroka Region.