The day started off with a bit of drizzle and gray skies but developed into another beautiful spring day in Montana, perfect or a drive with friends across our beautiful state.

The season kick off of the 2012 Absaroka Porsche Club Calendar was a huge success.  It was our best turn out ever for the annual drive to Chico Hot Springs Resort with 12 Absaroka Porsches and our adopted club member Dennis Franks in his red Pantera. 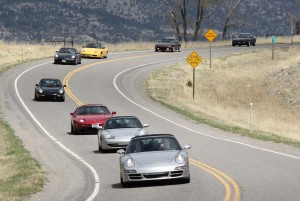 Joining us for the first time were new members Ben Van Beeks in the ex-“Whee1” 944, and Joe and Victoria Hayes in their silver 911.   Herb Stoick joined our ranks a couple of years ago at the All Euro Car Show with his 928.  This was also his first time out to one of our social events.  We’re glad they were able to make it.

It was nice to see all the Absaroka gear being worn ranging from hats, to shirts and jackets.  It really makes our members look “professional” and our club bigger than we are.

The first excitement of the day was Greg’s speed yellow Boxster bellowing out a cloud of white smoke.  Club mechanics quickly diagnosed the ailment as a faulty air oil separator.  I’m sure this put a damper on his day’s activities as he no doubt worried about getting it home to Billings. (Professional diagnosis proved it was in fact a failed Air Oil Separator that was quickly rectified by the folks at Metric Wrench).

Lunch was once again in Percies Poolside Grille.  The Chico staff had a table all reserved for the group.  Our server Constance worked hard at taking drink and lunch orders and made everyone feel welcomed.

While we waited for our lunch, Dan held an impromtu raffle for some trinkets from other regions he had received at the recent president’s meeting in Great Falls.  Using the back of some old business cards as tickets, everyone wrote down their name and the youngest member of our group Jacob Hofer drew the winners.

Dave Mumford won the club patch from the Northwest Region.

Jody Schofield won a portfolio from the Vancouver Island Region.

After lunch, those staying overnight decided to head to Yellowstone National park to kill a couple of hours before check in.

Vice president Steve Homec led the way to the north entrance at Gardiner, Montana and on to Mammoth Hot Springs in Yellowstone.  Along the way we all got to pass a Corvette, which was fun for us and probably not so much for him.  The start of National Park Week meant the entrance fee was free.  The famous Roosevelt Arch built in 1903 (99 years old on April 24) provided a majestic backdrop for a photo opportunity as each Porsche passed through the 50 foot tall arch.  The loop drive around the Upper Terrace was still closed, but the Lower Terrace area provided a glimpse of the natural treasures hidden within Yellowstone National Park, such as the 37 foot tall Liberty Cone which is a remnant of a long dead hot springs.  Afterwards, Steve led us another Yellowstone treasure; the ice cream shop hidden in the Mammoth store.

The second exciting car issue involved Bill Windham’s red 928.  It started to sputter while climbing the hill up to the upper terrace at mammoth in Yellowstone.  First thoughts were the fuel pump, but it later cleared up.  The issue was most likely a result of sitting for the long winter.

The group returned back to Chico around 4:30 PM, plenty of time to catch a soak in the pool, and get ready for dinner in the Wine Cellar. 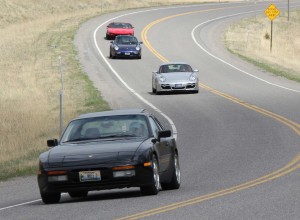 The Wine Cellar is located behind the main lodge in a small rock building.  The décor inside was rustic, but elegant; just what one would expect in Montana.

The group started to arrive at 6:30 and our server for the evening Debbie, quickly began taking and filling drink orders while everyone found a spot and kicked back for a nice evening.  The menu at Chico most likely has been the same for years.  But as they say, if it’s not broke, don’t fix it.  This was a nice treat and provided a cozy, intimate setting to relax and enjoy an excellent meal for Chico’s chefs.

Following dinner, some retired after a full day, while others headed to the Chico Saloon where the Montana band “Ten Foot Tall and 80 Proof” was playing a selection of country/rock.  Herb proved to be the only real night owl of the group, everyone else retired around ten.  Bill Windham, Dan Cole, Steve Homec and Dan’s guest Steve Amen enjoyed a nice cigar until late into the night.

It doesn’t get much better than that.