Your time has come, now hasten little snowflakes,
To vanish quite away;
The spring-tide hours are sounding gentle warnings
Forbidding you to stay.
~ M. E. Hathaway

And so it is, the gray skies, sub-freezing temperatures and snowy roads of winter are quickly vanishing away here in the Absaroka Region. So much so, that a group of eager Absaroka members met for a spring test drive to wake up our Porsches from a winter’s nap and to discover “Where the Hell Is Roscoe?”

Leading the Billings group was Absaroka Region President ,Stephanie Haider, in her 911 cabriolet. She was joined by Dan Cole in his Boxster S, Graham Beckett and Susan Peacock in their 993C4, Herb Stoick in his 928S, Susan Finn and Bob Voight in Susan’s 944. After a short driver’s meeting and signing of waivers the Billings group was off. Turns out we were off in two different directions; one along the back roads to Columbus, the other via the Interstate to Park City and then the back roads to Columbus. One pesky traffic light foiled a perfectly laid out plan. As the group reconnected in Columbus we met up with faithful Big Timber members, Bill Windham in his new steed, a ruby red metallic 997 C4S cabriolet, and Tom Agnew in his Cayman S.

Bill’s new ride is officially a member of the Absaroka Region after having paid the requisite admittance fee of a chipped windshield during the drive.

Since Roscoe’s Grizzly Bar, our lunch destination didn’t open until noon; we decided to make a detour towards Nye, Montana, on one of our Region’s favorite roads.

Hidden along the base of the Absaroka-Beartooth Mountains is our own hidden slice of heaven. County Road 419 is a 20 mile-long highway with almost zero traffic, a racetrack smooth surface and a very generous 70mph speed limit.  =Your biggest worry is in the early morning and evening hours when the numerous deer start to move around, but midday that’s not as big of a concern. Passing through Fishtail, MT, the road follows Fishtail Creek, offering some twisting blacktop before it then opens onto the flats that border the mountains. The road is scenic, and the drive therapeutic.

We stopped for a photo shoot at Montana Jacks to document the occasion. It was a beautiful day in Montana; blue skies, snowy mountains and cool spring temperatures.

Unfortunately, Herb had to leave our tour early to head back to Billings. As he roared off in his 928 its big V-8 sounded like an American muscle car!

So where is Roscoe? Well it’s an easy drive from Billings and is nestled half way between Absarokee and Red Lodge. I don’t think it’s technically a town, more of a stopping off and meeting place. It’s perfect.

The Grizzly Bar is a bit of a Montana institution. During the summer months it a standby destination for local bikers and other car clubs out enjoying the day on poker runs.

Lunch at the Grizzly Bar was enjoyable and the food was worth the drive.  Stephanie held a short meeting and we talked about upcoming events, getting more Absaroka pins and her upcoming trip to the annual Porsche Club Zone 6 President’s meeting in Gig Harbor, WA. 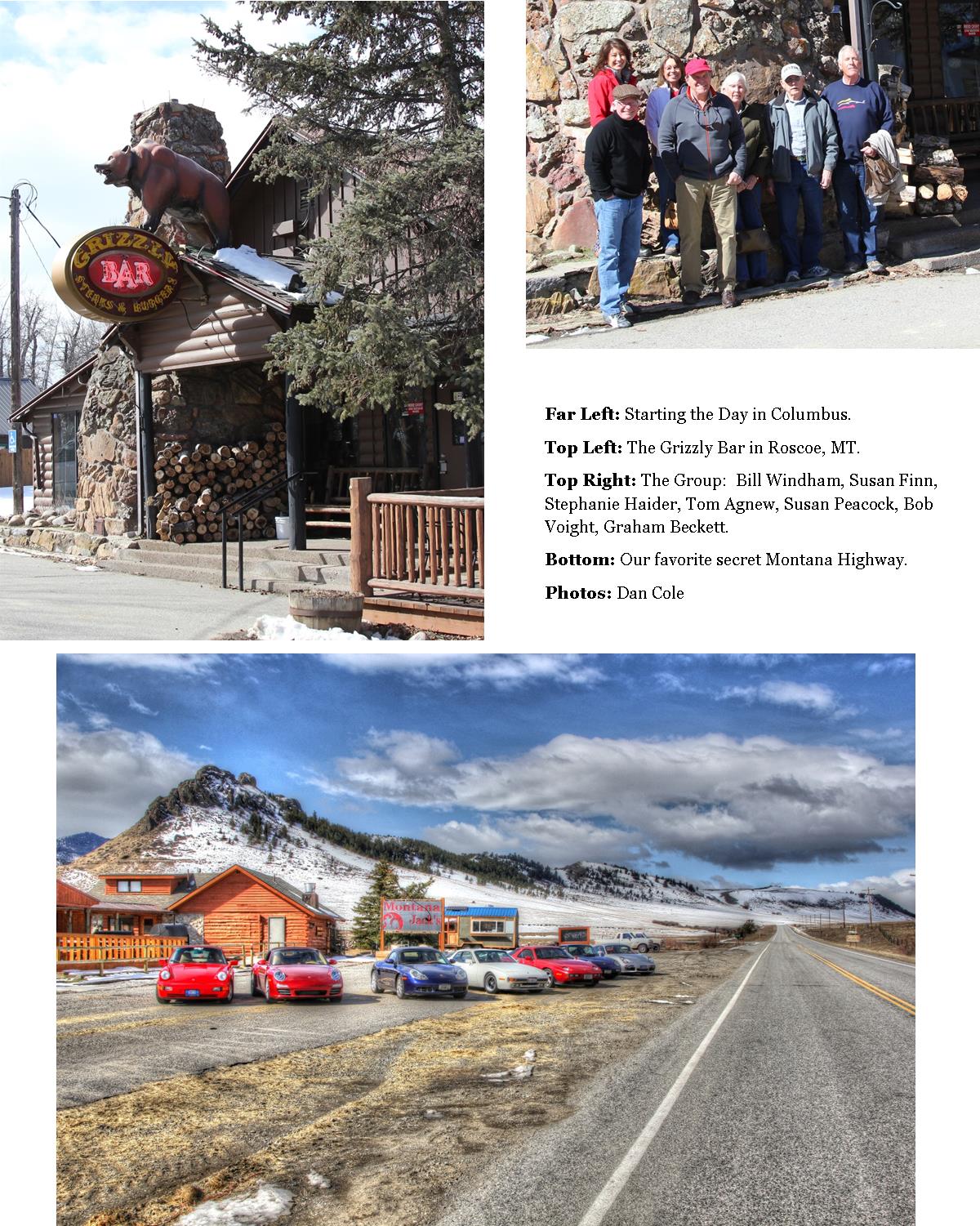